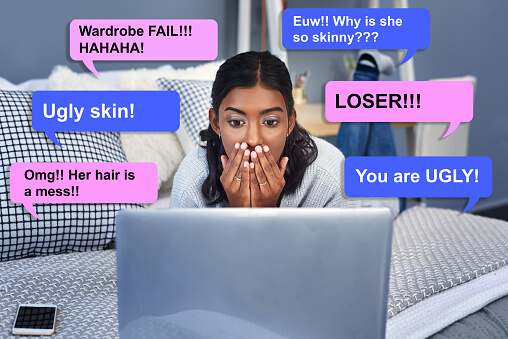 Social Media Kindness Day is a UK awareness day. Created in 2020, it draws attention to the nasty habit of trolling. It also promotes ways in which we can recognise it and help prevent it.

The day exists due to a very sad event. Caroline Flack, a UK presenter took her own life earlier in 2020 after being trolled on the internet. A prominent figure on TV, she was recently been exposed to the darker side. As she was accused of alleged assault against her boyfriend. Subsequently, she was abused on her social media.

What is online trolling? (Why is it important to Social Media?)

Online trolling is the deliberate inflammation and defamation of a person on social media. It is constantly shocking to me that it even exists but sadly it is highly prevalent in our society today. Have you experienced it at all? Once, it was restricted to celebrities but now it creeps into social media everywhere. From the smallest Facebook account to the largest Instagram following.

I experienced my first ‘troll’ a while back. I posted in a FB bereavement group I belong to about my daughter who passed away from meningitis. Bereavement groups are spaces where people who have been through this traumatic experience can come together and support one another without judgement. Well, safe to say, I was judged. Another member read my post and then my family blog; she called me fake and said there is no sign of my grief.

The blasé way somebody who knew nothing about me could throw nasty comments about a very personal topic took my breath away. Which is one of the reasons I created my own FB group – Bereaved parents safe space. Social media is a very easy platform to throw comments around on. It is almost as if the writer does not have to justify themselves or think about the consequences. Which is exactly why Social media kindness day was created.

These accounts are, by definition, public. The majority of people strive to achieve the most amount of online ‘friends’ or ‘followers’ that they can. They think it makes them look more popular. However, this means most of these followers are not family or close friends. These people do not have a caring interest in that person. They are quick to post a ‘throwaway’ comment where the intent is to judge, hurt or provoke.

To me, it seems the most vulnerable group to online trolling are the young. Specifically young teenage girls. Data from YouGov found in 2019 that almost a fifth of teenagers spent 4 hours online every day. Shockingly, 14% of 8-12 year old’s also spent four hours or more online. Instagram tops the list of most used social media platform, followed closely by Facebook. Snapchat and YouTube completed this list.

Being a teenager or pre-teenager is pretty difficult. They are caught in that grey area between being a child and an adult. As well as the pressure of school, they are expected to act more maturely. Expectations also include having some idea of what they would like to do after school and also be socially confident. How then, are they meant to deal with the endless throwaway comments on social media that hurt and expose them to the world.

My 11 year old son now has a phone. On his phone, he uses WhatsApp, TikTok, SnapChat and YouTube. He is only 11 so I’m holding back on Facebook and Instagram. However, I know it won’t be long before he is begging me to be allowed profiles on these forums. A couple of his WhatsApp groups have up to 100 members and there is regular ‘nastiness’ on them. Thankfully, he does not show much interest in this. I do, however have friends with girls who react rather differently. Groups are set up, then one member is deliberately excluded. A conversation takes place and the evidence is there in writing for the ‘target’ to see the hurtful comments.

These hurtful comments are not much different from when we went to school. However unless the chat is erased, the evidence lives on. On the screen and in the child’s mind. A child no longer has their home as a safe haven, somewhere they can forget about the intricacies of school politics. Rather, most children carry their phone around with them until they go to bed. This is a constant reminder to check what friends or foes are saying about them. Very anxiety inducing.

This age group is also not old enough to realize the repercussions of what they post on social media. Yes, posts and accounts can be deleted but the majority of people do not. They then go for an interview for a job and don’t realize that their potential employer has already seen their presence on social media. This person would have googled them and probably come up with at least a couple of reasons not to employ them. The power of the digital footprint. However, my son did know all about Social media kindness day, which would have made him stop and think. A brilliant tool for awareness.

It can be all to easy to live your life through social media. Your every moment, a potential photo. Handpicking the photo, the occasion to make your life sound perfect. How many likes or comments did you get? How did this make you feel? We start to live vicariously through our social media and sometimes forget to actually socialize!

So, what are the solutions to trolling?

Imran Ahmen is CEO of the Centre for Countering Digital Hate (CCDH). This is an NGO that has produced a practical guide for public figures dealing with trolls called Don’t Feed the Trolls. They said there are two main types of troll.

The first type of troll will aim their remarks at public figures with large numbers of followers. This is in the hope they will get a response. When they do get a response, this means their own remark has been broadcasted to a wider audience. This will then help their own social media presence.

The second type are those that show ‘negative social potency’. These are people who enjoying causing harm to others on social media. If it gets a response, it encourages them to continue. Nasty indeed.

Why do people troll?

People can troll for a number of reasons. The variety include: attention seeking, being bored, because they think its funny or for revenge. All of them pretty awful reasons for deliberately causing some level of pain or heightened anxiety to another person.

In August, 2013, Hannah Smith took the extreme action of killing herself after being cyber-bullied. At 14 years old, she had so much of her life in front of her yet decided to hang herself. After being bullied about her eczema and alienated by friends, it seems she went onto the website Ask.fm and sent vile comments to herself. This was maybe as a result of the bullying she had experienced. Her parents knew some bullying had been taking place. However they had no idea of the extent of pain she was suffering.

Well, I have no steadfast solution. Instead, I will be extremely vigilant with my son’s social medial as he experiments more. He already has a time limit on how long he is allowed to spend on his ‘gadgets’. This won’t change while he lives with me. I try to follow that example myself so he sees that I do not live my life on my phone. Rather I communicate with people in the ‘real’ way.

Many parents I know ‘spot check’ their children’s social media. This is a pattern I will follow. I want him to feel that I trust him enough to be sensible and know that he will not be nasty to anyone himself. I also have to take my responsibility as a parent seriously and protect him.

Make sure there are no ‘hidden’ accounts. Worryingly, I know of a few teenage girls that have created two Facebook or Instagram accounts. One is accessible by parents, the other is not. Having seen the type of pictures young teenage girls are posting of themselves, I can guess the content of the hidden accounts. This is where trust has to come in. Trust in your child and in your parenting. Communication is also key here. If you do not communicate well with your child they will feel they cannot open up to you. Then you will miss out on a section of their life. A section that could cause a lot of problems.

Social media is a wonderful thing. I can keep in virtual contact with friends the other side of the world and feel like I am still there when they post pictures. Celebrities can be ‘followed, politicians, chefs, anyone and we can get their opinions on various topics. I can feel like I am travelling to places I have not yet been to with the constant posting of beautiful pictures.

It is a very powerful tool and one to be praised yet treated with caution. We all need to monitor how much time we spend on it and how much we believe in the hype of a beautiful picture or a well-written caption. Both are constructed, however real life is lived and we want to be around for it. Be aware of how you treat others on your accounts and don’t give trolls the power by responding to their vileness. Don’t just be aware, be Social media kindness day aware.

Were you disturbed by this post? Head over here and let me know your thoughts.