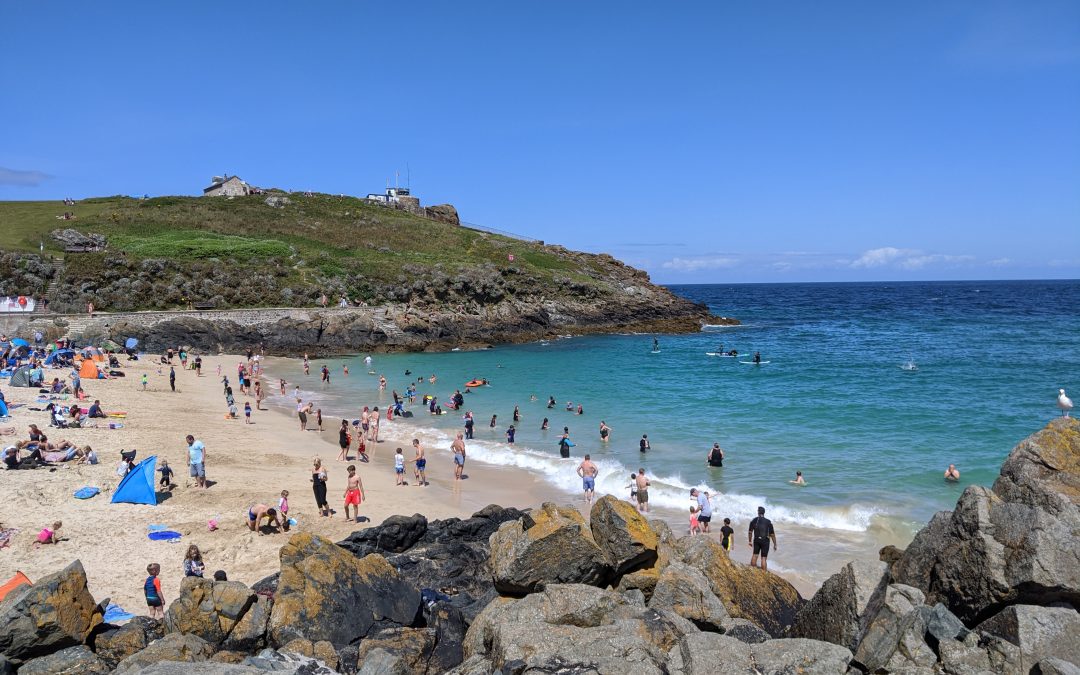 What were your holiday plans this summer? Were you looking forward, with anticipation to a booked holiday? A foreign destination not previously visited? Or visiting family that live far away? Whatever our plans, I’m guessing these are now mainly non-existent.

For me, my summer plans have been tumultuous. Covid became my jealous partner, the ‘I don’t want you to go away, please change your plans’. My bank balance has been my sensible voice. ‘Now listen Melinda. You need to focus on your financial future, not your frivolous present’. My heart, however, led me to book a romantic week away with my boyfriend. Which is where I started writing this, on a train speeding towards sunny Cornwall.

For all of you who have not been to Cornwall, it is a world apart from other regions of England. Lush, rolling fields colored a rich green flash past on the train. The landscape is not flat and would keep your buttocks in shape if you walked around and get you bikini ready for those beach days.

I have many childhood memories of people with a strong accent which I could often not understand but after a few days there as an adult, I found this has been much diluted over time. Too much TV? Or people moving around and loosing the dialect they grew up with? Who knows but I do remember that Cornwall was a little like Lord of the Rings. Another world within England.

After doing research on Cornwall’s geography, I decided to base ourselves in Truro, a small fairly attractive city. From here, you can catch trains or buses to a vast array of places worth a visit. Over the week, we visited Newquay, Falmouth, St Ives and a few tiny villages along the way. I found Newquay to be a fairly modern but unattractive seaside town, its major attraction the large, beautiful beach. This is why this town has a famous reputation as its currents and tides cause great surfing conditions. The day we visited was unfortunately grey but even so the sand was a soft orange hue and the sea a fierce grey against the large, black rocks surrounding the bay. Later in the week, the sun decided to make an appearance then shone in all its glory and my boyfriend even went so far to liken St Ives to the Mediterranean. A compliment indeed!

If you want to visit this area of Cornwall, I would suggest making St Ives one of your ‘must do’ days. It is an extremely pretty, perfectly sized town. Some of the streets are cobbled and winding down to the beach, the buildings are predominately very old, tiny and of varied shape but all white-washed and beautiful. Fish restaurants are plentiful, there are the requisite tourist shops but also a bountiful selection of great shops and cafes to wind away a couple of hours if you have had enough of the beaches.

We stayed in a fantastic ‘Victorian Villa’, aka ‘BnB!’ It’s called ‘Cliftons‘ and we found it on Tripadvisor. It was lovely and I would highly recommend it if you ever think about basing yourself in Truro for a slightly cheaper holiday. The couple who run it are very polite and knowledgeable about the area and the house itself was fantastic. The whole building had recently been renovated and, along with a great breakfast, I felt like we were staying in an expensive hotel. Well worth the hours spent on Tripadvisor!

However, the curiosity I felt all week was at the lack of face coverings we saw being worn. When I am at home, I only feel the need to wear mine when visiting shops or in a crowded street. However, in St Ives, there was hardly a mask to be seen. It was as if this virus did not exist or I had been invited to the equivalent of a ‘measles party!’ Why was this? I know the Cornish are easy going people but it was the tourists as well. It was as if everyone had the mentality that if the sun were out, if the kids were playing on the beach then nothing bad would happen to them. As a consequence, both my boyfriend and I felt the need to wear ours more in the crowded streets and our opportunity to paddle-board was cancelled due to the lack of social distancing at the water’s edge.

The whole week, we used public transport to travel Cornwall. I had no desire to spend five hours on the motorway from London to Cornwall just to have a car for the week. Instead, we spent five hours on trains. Far more relaxing and I had the chance to write and talk. Its amazing what you can get done sitting on a speeding train. My boyfriend definitely spends too much time on social media but we still got the chance to talk some. During the week, we used the lovely picturesque branch lines that snake around the county, saw the scenery change and some amazing beaches. Cornwall is truly a magical county. If you want to avoid the stress of long motorway driving, I would recommend booking a ticket through Train Line in advance. Its well worth the money.

I did not originally plan on going to Cornwall for two reasons. Firstly, I had though about going abroad. Doesn’t everyone who lives in Europe? I love travelling and due to the lock-down actually had some money! Then of course we couldn’t go abroad. So I looked more locally. The second reason was that I wanted to make sure my boyfriend enjoyed it. He is Columbian and has travelled all over the world so although I love Cornwall I was not sure it would be ‘exotic’ enough. Well, I was wrong! When the sun was out, when the sea sparkled and the seagulls circled, he compared it to the Mediterranean. Not once, not even twice but many times! How nice to know that our country is appreciated for its natural beauty by others who are used to such stunning scenery.

The last day of our summer holiday saw us in Truro, waiting for our train. After checking out of the B&B, we had three hours to fill so escaped the fierce sun by sitting in the tiny picturesque cobbled square directly outside the cathedral that dominates the city skyline. A stunning building from the outside, we took it in turns to visit the inside, the other staying with the luggage.

I am not a Christian or even a lapsed one. Having been raised in a strict Christian household, I often wondered what my beliefs were in my young adult life and what were those forced upon me as a child. I no longer go to services and have my own beliefs of a soul and a spirit that lives on. I am now happy with this and at peace with my own beliefs.

Consequently, when I enter a lovingly constructed church or a statuesque and dominantly beautiful cathedral, I feel a mixture of emotions. No one could deny the architecture is amazing, tiny nooks filled with details of saints, men honoured for their war contributions and a tall, highly intricately carved ceiling that demands your attention.

However, it is not just this that grabs my attention. Having wondered around, admiring and reading, I sat on a (socially distanced) chair in the middle of the church in quiet contemplation. My daughter’s birthday is in August, a time I should be celebrating her reaching another year and seeing more of life. Instead, all I have are memories. Which makes me feel bitterness, an emotion that was previously unfamiliar to me and one I shudder away from. Since she passed away, aged two, I have found it difficult to enter a church. Melody’s spirit has always felt very close to me, almost protecting me from the intense pain. Now I feel more at peace and whilst she is still with me every day and more so at certain times I feel that her soul has now entered a special place where she can continue her own unique journey.

Sitting on the train as it thundered back to London, my mind ran over our week. I concluded that our holiday to Cornwall was a success. The towns were explored, the beaches were laid upon, the sea was splashed and I have the loveliest memories of a trip. Yes the weather was temperamental and the seagulls wanted the ice-cream but I was relaxed, enjoyed every minute with my love and am now on my back to give my son his present and my attention. It can’t get much better than that. 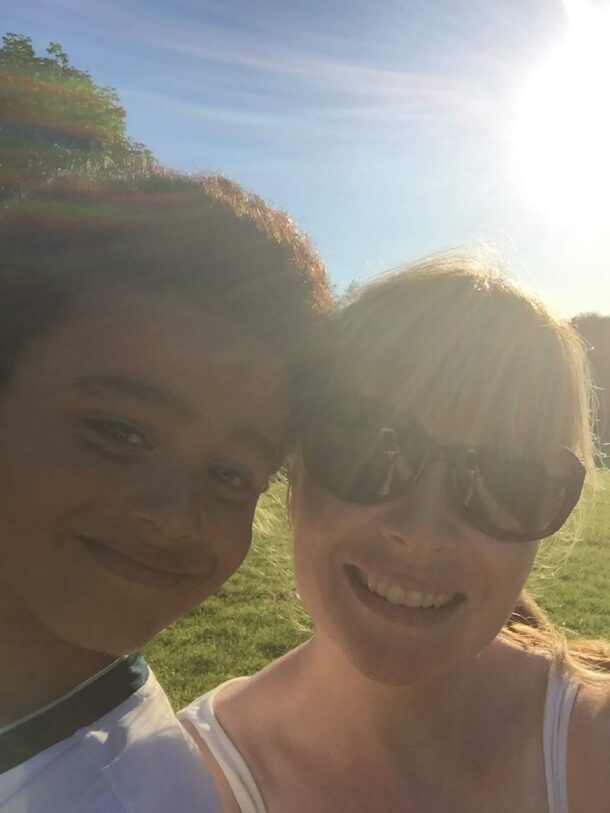